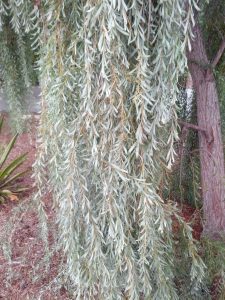 How is it the thought of a weeping tree can provoke a smile?
This phenomenon is but additional proof that gardeners are an iconoclastic, rebellious and “au contraire” sort of group. Tell a gardener in your neighborhood “you could never grow this here” and, soon enough, you are sure to see the plant in question popping up all over your neighbor’s lot. Similarly, you might think weeping trees would increase sadness, yet they are critical to the happiness of gardeners everywhere.
Perhaps the most popular weeping tree is the white birch, Betula pendula. For years, it has been a convention of front yard landscaping to build a mound of earth in which three white bark birch trees are clustered together. For a change of pace, consider the California native water birch (Betula occidentalis), whose bark is red. Another pendulous native tree you might want to look at is the desert willow (Chilopsis linearis), whose trumpet flowers may be pink, white or lavender.
If you ever visit Hidden Hills, you will become instantly familiar with the California pepper tree (Schinus molle). It is the single parkway tree planted along the streets of that community. The California pepper tree, which is actually native to Peru, is the perfect weeping selection for large sunny yards where a drought-tolerant, fresh-looking evergreen shade tree is sought.
Another drought-tolerant weeping evergreen worth considering is the Australian willow (Geijera parviflora).
One of the signature trees of the Pierce College Arboretum is the Montezuma cypress (Taxodium mucronatum). It is a tall and robust weeper that might remind you of a redwood, to which it is botanically related. Nichol’s willow-leafed peppermint (Eucalyptus Nicholii) is a wonderful, medium-size tree with pendulous, aromatic leaves. The weeping bottlebrush (Callistemon viminalis) has scarlet flowers that cascade downward on arching branches.
Many pine trees have pendulous needles or branches including Scotch pine (Pinus sylvestris), cluster pine (Pinus pinaster), Chir pine (Pinus roxburghii) and sugar pine (Pinus lambertiana). A juniper tree of note (Juniperus scopulorum “Tolleson’s Blue Weeping”) has drooping blue-gray branches and weeping acacia (Acacia pendula) has long foliar tresses of silvery blue.
No discussion of weeping trees would be complete without mention of the weeping willow (Salix babylonica). This tree can be grown successfully in the Valley, but only if you give it lots of space. It is highly susceptible to diseases and insect pests, which will surely find it a welcome host unless it is given well-drained soil, as well as unimpeded air circulation on all four sides. In other words, this tree needs to stand alone. It should not be surrounded by smaller trees or shrubs, and it should not have perennials or bedding plants beneath its canopy. Finally, the weeping willow should be planted in the middle of a yard or lawn and never against a wall or building.
Tip of the Week: A fascinating container plant with arching, pendulous leaves is the ponytail palm (Beaucarnea recurvata). A member of the agave family, it is also referred to as bottlepalm or elephant foot because of its thick trunk base. With its tolerance for drought and cold, it is one of the easiest plants to grow.
< GARDEN WONDER
Gardener: John Lewis
Residence: Sunland
Plant of interest: Century plant
What makes this plant amazing: The century plant was given to Lewis 25 years ago by Beatrice Wood, a nationally known artist and sculptor who lived in Ojai, and died only a few years ago at 105. When he first got the plant, Lewis says it was only about 6 or 7 inches high.
Since then, the plant has grown to about 50 feet tall, with around 30 branches. A flower stalk – which accounts for most of the 50 feet – started showing from the plant in April.
And though the plant is starting to die – “I think it’s gonna turn yellow, but it hasn’t yet,” Lewis says – people still comment on it when the see it from the road.
“People stop and look at it. They take pictures of it sometimes,” Lewis says.
Maintenance: Lewis waters the plant occasionally.
What Joshua Siskin says: “A century plant is essentially a flower stalk. After it blooms, the plant dies. You might have little plants that continue to grow under the root system, even after the main plant dies; but really, the century plant is misnamed – it doesn’t live 100 years.
“The plant can get really tall and grow really fast. In a few weeks, it could grow 50 feet. It’s related to the agave – where tequila comes from. Usually, there are whole plants on the flower stalk itself – they can be detached and planted away from the main plant.”
– Mike Chmielecki