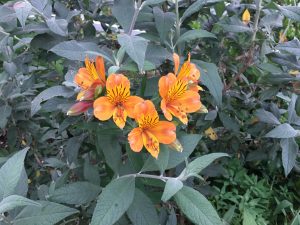 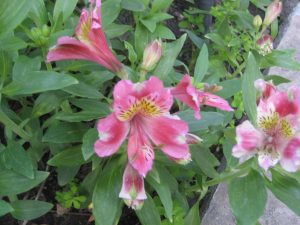 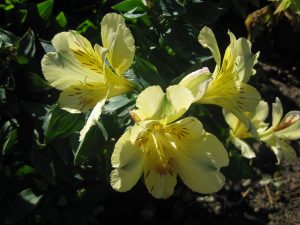 If ground cover selections in Southern California were confined to Peruvian lilies (Alstroemeria), I would not have a problem with that.  There are Peruvian lily cultivars in every color except blue — although ‘Purple Passion’ is available — and sizes range from 5 foot giants to 1 foot pygmies.

I happen to have a sample of ‘The Third Harmonic’ Peruvian lily, which grows to five feet tall, in my garden.  At this moment, it is blooming against the pleasantly contrasting background of a soft, gray-leafed butterfly bush (Buddleia) that has yet to unfurl its wands of Lepidoptera attracting blooms.

Peruvian lilies, although benefiting from twice a week watering, can live on less.  They blanket the ground as they spread vegetatively with their rhizomes’ assistance, creating a living mulch that minimizes evaporation of moisture from the soil surface.  And should you suffer a mid-summer breakdown of your irrigation system, there is no need to worry; even if your Peruvian lilies die back down to the ground, their rejuvenation will come in the form of new vertically skyrocketing shoots, ascending from their resilient rhizomes, when watering resumes.  An added bonus:  as cut flowers, Peruvian lilies last up to two weeks in vase arrangements.

Once I started with orange Peruvian lilies, I could not help but complement them with two other orange flowered ground covers, daylilies (Hemerocallis) and Gerbera daisies.  Although daylilies come in many colors, yellow and orange types are the most vigorous among them.  ‘Stella del Oro’ is a highly recommended cultivar since it re-blooms into the fall as long as faded flowers are religiously removed and its foliage, which grows only a foot tall, stays verdant green throughout the winter, unlike typical daylilies which experience winter dormancy.  Gerbera daisies also come in every color and, in their case, all are equally tough, disdaining over watering in fast draining soil and, although spreading slowly in the garden, can live for a hundred years in half-day sun as long as their roots don’t stand in water.

A caveat associated with Peruvian lilies has to do with their invasiveness once they become established in your garden.  You will have to regularly prune or pull them away from other plants that would otherwise be engulfed by the Peruvian lilies’ prodigious growth.

Two other orange flowered beauties have been a blessing in my garden.  One is Abutilon (a-BYEW-ti-lon) ‘Fruit Salad.’  I have had this plant for nearly twenty years and it has never flowered as much as it is flowering now.  Abutilons flourish in half-day sun but should be sparsely watered.   As with Gerbera daisies, their downfall is unnecessary pampering.  Foliage resembles miniature maple leaves and so the plant has earned the appellation of flowering maple.  Texturally, flower petals resemble the thin covering on a Chinese lantern, which is another one of its common names.  The scientific name of Abutilon, however, is derived from Arabic and points to its Middle Eastern habitat.

‘Judy Garland’ rose is another orange gem.  Actually, flowers open in yellow but immediately start to turn orange, eventually assuming a deep reddish orange color.  Sweetly fragrant ‘Judy Garland’ is a floribunda rose, meaning that its foliage is always a lush deep green that’s never blemished by fungus diseases, and that its flowers bloom reliably from spring until late fall.

Tip of the Week:  One of the most undervalued, yet appropriate, ground covers for our part of the world is peppermint-scented geranium (Pelargonium tomentosum), which is covered with spidery white flowers this time of year.  Its peppermint fragrance is stronger than that of the peppermint (Mentha x piperita) that is commonly grown in herb gardens. Its large, floppy leaves are edible although most people refrain from consuming them raw because they are covered with soft hairs.  Still, these leaves may be used for flavoring tea and in baking.

Peppermint-scented geranium leaves contain potent medicinal oils and thus are useful as a poultice for treating bruises or sprains.  (A poultice may consist of leaves that are ground up and combined with water to form a paste.  The paste is applied directly to the skin or slathered onto gauze or cheesecloth that is placed next to the skin.)  The leaves, due to their powerful scent, also make a stalwart constituent of potpourri.